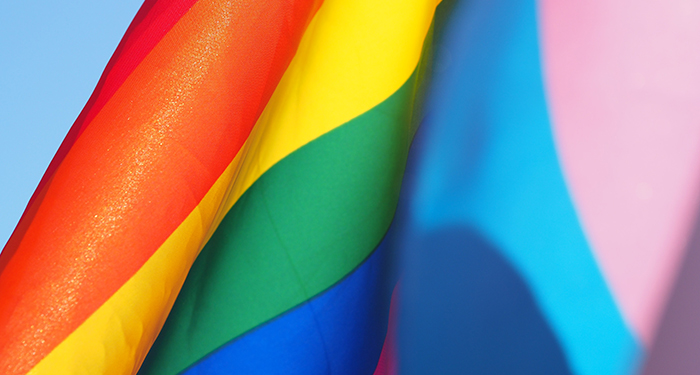 It’s Pride Month, and the Fond du Lac Public Library has some wonderful books by LGBTQ+ authors. These titles are mostly newer and include fiction and nonfiction, from essays to romance. Check out the Pride Month display on the first floor of the library for more book ideas.

Sissy by Jacob Tobia. A bold, hilarious and honest memoir full of thoughtful commentary on gender identity and sexual orientation.

I Can’t Date Jesus: Love, Sex, Family, Race, and Other Reasons I've Put My Faith in Beyoncé by Michael Arceneaux. A timely collection of essays about such topics as race, religion, politics, music, the strides of the LGBTQ+ community and the challenges of being black and gay in America.

Good Boy: My Life in Seven Dogs by Jennifer Boylan. Jennifer Boylan describes her life growing up as a young boy in Pennsylvania before transitioning into a middle-aged woman through seven junctures of growth and transformation - accompanied by seven dogs.

Wow, No Thank You by Samantha Irby. Irby’s conversational, self-deprecating style of humor shines in her second collection of essays about being a middle-aged, lesbian, black woman in a small Republican Michigan town.

Red, White & Royal Blue by Casey McQuiston. First Son Alex Claremont-Diaz and Prince Henry of Britain must fake a friendship after their fight at a wedding threatens American/British relations.

Call Me By Your Name by André Aciman. A story from the point of view of 17-year-old Elio who falls in obsessive romantic and sexual love with 24-year-old Oliver when he stays one summer as a guest at Elio’s parents’ villa on the Italian Riviera.

Upright Women Wanted by Sarah Galley. Esther stows away in the librarian’s book wagon to escape an arranged marriage in a near-future American Southwest full of bandits, fascists and queer gunslinging librarian spies.

Less by Andrew Greer. On the cusp of his 50th birthday, failed novelist Arthur Less receives an invitation to his ex’s wedding. Rather than accept, Arthur accepts invitations to ALL of the varied international literary events he’s been invited to and begins a very strange trip around the world.

The Henna Wars by Adiba Jaigirdar. Two teen girls create rival henna businesses for a school project in this rom-com set in a Catholic girls’ high school in Dublin.

Emilyn Linden is a librarian in the FDLPL’s Information Services department.