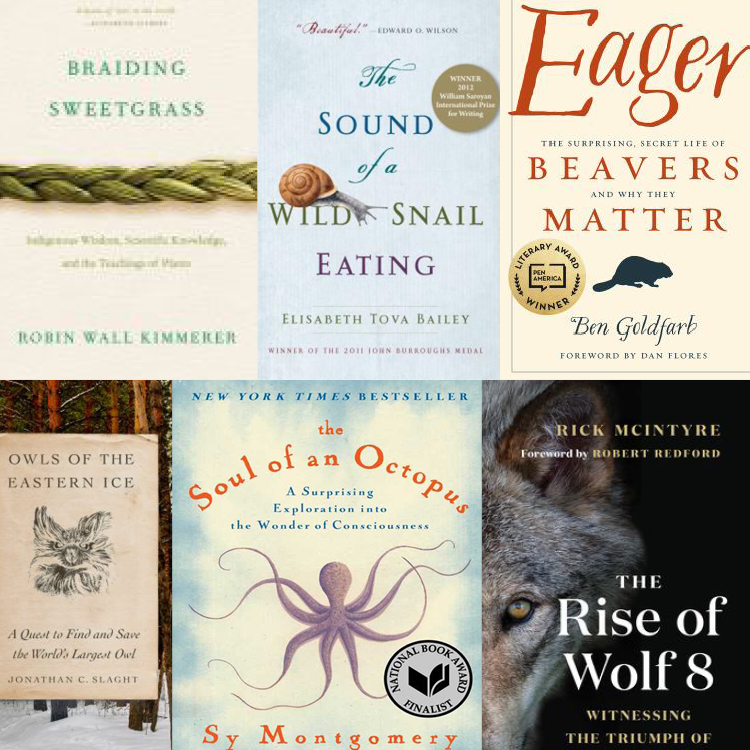 I love reading nonfiction books about nature. I’m always learning something new about the world, or the universe, the life we share it with or the landscape we all live in. Some of my favorite reads are Braiding Sweetgrass by Robin Wall Kimmerer, The Sound of a Wild Snail Eating by Elisabeth Tova Bailey, The Death and Life of the Great Lakes by Dan Egan, and anything by Peter Wohlleben or Frans de Waal.

There have been some amazing books about the wildlife we share the earth with published in the last few years. Here are some recommended titles, just in time for Earth Day.

Eager: The Surprising, Secret Life of Beavers and Why They Matter by Ben Goldfarb tells the story of beavers through history and how their behavior and engineering impact the land and waterscape. You might find yourself joining the growing group of “Beaver Believers” evangelizing for reintroducing this amazing rodent to landscapes across the US.

Owls of the Eastern Ice: A Quest to Find and Save the World’s Largest Owl is by field scientist and conservationist Jonathan Slaght. Slaght shares his team’s harrowing fieldwork in eastern Russia, a forest covered, frigid region inhabited by tigers and bears, studying the elusive and endangered Blakiston’s Fish Owl. Longlisted for the National Book Award in 2020.

In The Soul of an Octopus: A Joyful Exploration Into the Wonder of Consciousness by Sy Montgomery, we learn about the physical and emotional world of the octopus. Montgomery travels the world to learn more about this solitary creature and its playful, curious intelligence and what scientists and zookeepers have learned about these fascinating creatures.

The Rise of Wolf 8: Witnessing the Triumph of Yellowstone’s Underdog by Rick McIntyre is the first in a trilogy about the daily lives of the wolves reintroduced to Yellowstone in 1995 and the challenges and pack interactions of the first few years after reintroduction. Written by an experienced wolf researcher who clearly explains context and paints a picture in words of how wolves interact among themselves when away from people.

Over the past couple of decades scientists have changed from thinking all animal behavior is reaction to stimulus to acknowledging that individual animals exhibit different personalities and behaviors. The Bird Way: A New Look at How Birds Talk, Work, Play, Parent, and Think by Jennifer Ackerman describes recent research into bird behavior and intelligence and relates instances of behavior from altruism to deception to gifting.

The Book of Eels: Our Enduring Fascination with the Most Mysterious Creature in the Natural World by Patrik Svensson explores the life of an animal that, despite being studied by many scientists over the decades, largely remains a mystery. Noone has ever seen an eel mate or reproduce. We don’t know why they swim to the ocean to die. Svensson relates not only what we know about eels, but also an exploration of beginnings and endings, mythology, gastronomy and philosophy as they relate to eels.

The event that prompted Rebecca Giggs to write Fathoms: The World in the Whale was a local beached humpback whale near her home in Australia. Through her research, she sought to answer questions about what we know about whales, but mostly to explore how humans have impacted whales through hunting, pollution, climate change and more.

Becoming Wild: How Animal Cultures Raise Families, Create Beauty, and Achieve Peace by Carl Safina looks into the cultures of three non-human species, sperm whales, scarlet macaw and chimpanzees. Safina describes how individuals function within their communities, how socialization is taught and cultures evolve and how knowledge is passed between generations.