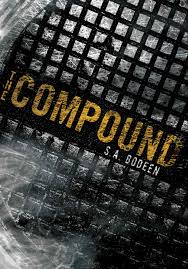 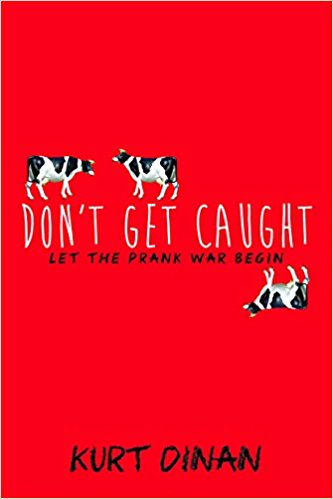 The Compound by S. A. Bodeen (series)*
Eli, his parents and two sisters have spent six years in a vast underground compound built by his wealthy father to protect them from a nuclear holocaust. Now Eli, 15, whose twin brother and grandmother were left behind, discovers that his father has perpetrated a monstrous hoax on them all.

Don’t Get Caught by Kurt Dinan
Max Cobb usually flies under the radar. Then a prank set him and his crew up for taking the fall for his high school’s legendary Chaos Club. In a quest to prove he’s more than ordinary, Max and friends decide to take down the club and the school’s disliked disciplinarian.

The False Prince by Jennifer Nielsen (series)*
Choose to lie, or choose to die. In a discontented kingdom, civil war is brewing. To unify the divided people, Conner, a nobleman of the court, devises a cunning plan to find an impersonator of the king’s long-lost son and install him as a puppet prince.

Guy Langman, Crime Scene Procrastinator by Josh Berk
Guy Langman can’t be bothered with much. But when his friend Anoop suggests they join the Forensic Science Club in the (possibly misguided) hopes of impressing some girls, Guy thinks why not. They certainly aren’t expecting to find a real dead body at the simulated crime scene. But after some girlish, undignified screaming, the two realize it is indeed a body, and they’ve stumbled across a real murder mystery.

Half Brother by Kenneth Oppel
On Ben’s 13th birthday, his parents introduce him to his new sibling: a hairy, swaddled baby chimp that will be raised as part of the family in an experiment run by Ben’s father, a behavioral psychologist. At first, Ben resists calling Zan his brother, but as he begins to communicate with Zan through sign language, he develops a connection with the chimp, even as he realizes that his father views Zan as just a scientific specimen. What will happen to Zan when the experiment is over?

Learning to Swear in America by Katie Kennedy
An asteroid is hurtling toward Earth. A big, bad one. Maybe not kill-all-the-dinosaurs bad, but at least kill-everyone-in-California and wipe-out-Japan-with-a-tsunami bad. Yuri, a physicist prodigy from Russia, has been recruited to aid NASA as they calculate a plan to avoid disaster.

Little Brother by Cory Doctorow
After being interrogated for days by the Dept. of Homeland Security in the aftermath of a major terrorist attack on San Francisco, 17-year-old Marcus, released into what is now a police state, decides to use his expertise in computer hacking to set things right.

The Monstrumologist by Richard Yancey (series)
“These are the secrets I have kept. This is the trust I never betrayed. But he is dead now and has been for nearly 90 years, the one who gave me his trust, the one for whom I kept these secrets. The one who saved me . . . and the one who cursed me.” So starts the diary

Novice by Taran Matharu (series)
Fletcher, a blacksmith’s apprentice, discovers he has an ability to summon demons from another world. Chased from his village for a crime he did not commit, Fletcher must travel with his demon, Ignatius, to an academy for adepts, where the gifted are taught the art of summoning.

Payback Time by Carl Deuker
Mitch doesn’t think much of his new assignment as sports reporter, but when he sees how Coach McNulty keeps reclusive new student Angel, who shows star-quality abilities in practice, benched until late in each hard-fought game, his suspicions are aroused.

Peak by Roland Smith
14-year-old Peak is a “climbing addict” ‒ it runs in the family. Follow his risky ascent of Mount Everest amid complex family dynamics.